New York City has a case of the Crazies!

Each and every day I am forced to "double take" something in New York City. It's less a case of shock or distaste as it is a statement of "wow, that's crazy!"
Two days ago I was on the E platform and saw a guy, probably in his 20s, who looked (NO JOKE) like a male version of Grace Jones from the 80s! The haircut was spot on. He even had some kind of white/gray stripe up the front right "edge". His outfit was somewhat MC Hammer-ish too. Classic 80s! It was both interesting/appalling/and funny to me (having been a product/victim of the 80s myself). 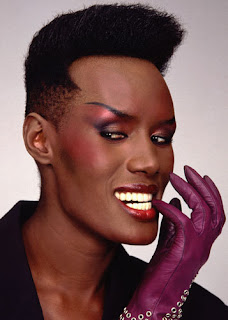 This morning I was on my way out of the subway at the 53rd and Madison station when I saw a delivery guy walking down the stairs carrying two plant/flower arrangements. Not one to stare in NYC, I glimpsed something near his mouth and had to look again. Was it lip piercings with some sort of bone shards? Was it a white mustache? Well...no...it was, of course, a tissue shoved into his nose because he had a nose bleed. Gross! Then I spotted his fur hoodie jacket. What?!?! I'm telling you...you can see the most bizarre things in this city if you disregard "city etiquette" and look around.
In the spirit of taking you by surprise, I am awarding everyone currently in the contest 1 bonus point as an early Thanksgiving treat!

I'm hoping to get into NY to watch them inflate the balloons for the parade tomorrow. I'll keep my eyes open for "Grace"

The tissue thing is really gross, but I enjoy all the NYC diversity. In so many other places, everyone just looks the same.

lol, i love people watching! (also a product of the 80's. loved them but am still fighting with our guitarist to get a few songs not from that era, smile)

You have seen lots of real famous people in the city too. You are like a celebrity magnet. I know I was with you when you met John Goodman... and no problem for you... you just walked right up to him and said "how do ya do!"

I lived in NY for most of my life and find everywhere else I go I miss the visual stimulation of the city. Bizarre is great.

I think it would be out of the ordinary if people in the city DID look as everyone else. That would be a great loss, as I read your post.
If your bored you just go people watching; never a dull moment!

Amsterdam, this afternoon: someone who looked like Doris Day ready for a cleaning spree. With red lipstick, of course. :-)
yvonnep

This is what I miss by not taking the subway

That is maybe the only reason I miss working in the city..... people watching.