I'm not changing my shoes...you can't make me

Today is a Monday. I could end this post there because I know you would understand.

It's a Monday and I'm achy for a multitude of reasons. And I didn't feel like wearing clothes that "fit properly" today...so I'm wearing brown pants that are "full" and an orange sweater (which I actually like - and got on sale for something crazy like $2.99 at Banana Republic a couple years back). I'm pretty sure that I picked up black shoes from my dark bedroom this morning but realized one was brown when I was on the train...and QUICKLY (you don't know how quickly) looked to make sure the other foot also had a brown shoe on it. I have the same pair of shoes in two colors, obviously. Whew....both brown.

And since there's a graveyard shift at the office today I decided, unanimously with my other selves, that I will not change my shoes today and you can't make me. Brown pants and brown shoes is defaulting to a match...no matter if the shoes are more chocolate and the pants are more heathered. Take that fashionistas!

No pictures...because I simply don't want to hear the laughter...ha ha ha

Hello fellow bloggers...I am back...and I apologize...has anyone been sucked into Flickr like me? I saw Jeannine poke her head in...I'm wondering who is next!!!

So what's new with me in knitting land? And where has March gone?!?!

The month started with a great day of new friends and knitting at Dora's house which Alyssa and I were privledged to attend! Dora, you may recall from prior posts, is my long-lost-sister (in spirit) and we "met" via Sock Wars 3. The War, and most of it's participants, were dreadful. But from the ashes rose a great friendship. Here's a photo of us...so cute! 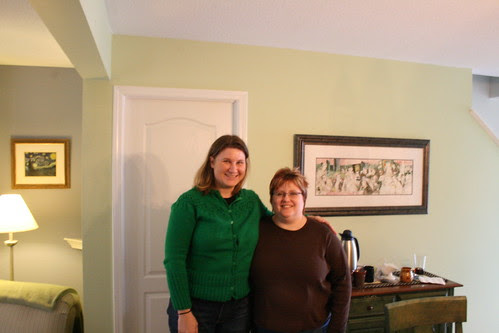 While at this mini-retreat Alyssa and I worked on our Lady Eleanor KAL For Two. I, however, questioned the sizing of mine? Was it too small? Would it be "wrappy" enough? How much yarn, in the end, would I need to make it everything I dreamed? Well, I frogged it the following day and restarted. Another day or two down the pike I decided that the second try was WAY too large. Urgh. Frogged again. Does anyone know what a pain it is to frog single ply silk? Let me just say, it's not fun. Attempt #3 seems to be the charm...although now I'm questioning if it's STILL too "wide". I ordered more yarn so I will have 2000 yarns invested when all is said and done. Egads! I'm halfway done and into the 3rd "ball" (at 500 yards it seems hardly a ball but more like a brick!). It's also, unfortunately, slightly too large to lug back and forth on the train. So it's slightly on hiatus for now...please pester me about it so it doesn't go into permanent hibernation!!! 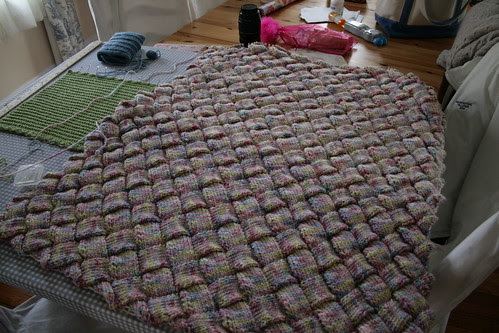 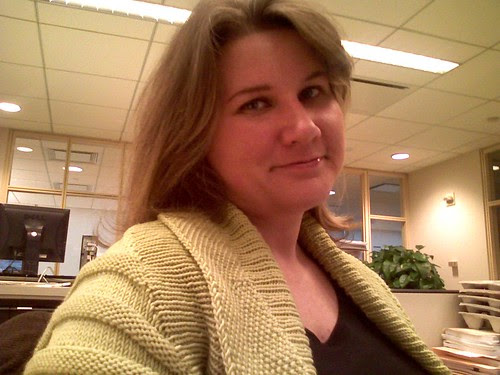 Finished Tangled Yoke - see above photo with Dora...I wear this Cardigan A LOT!!!

Because of the whole can't-carry-on-the-train issue with the L.E. I decided to start my mom's Flower Child sweater for Mother's Day. I'm making it with Knit Picks Cot-Lin in a similar green/sage color as the pattern photo. I haven't worked with the yarn before but so far it's been working up nicely. I have no photos to share of it as yet...bummer.

Instead...I'll leave you with this goofy photo mosaic I made for my 365 Project! 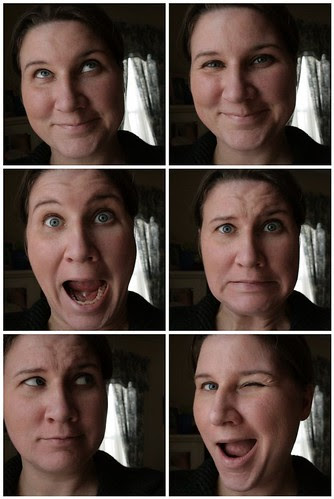 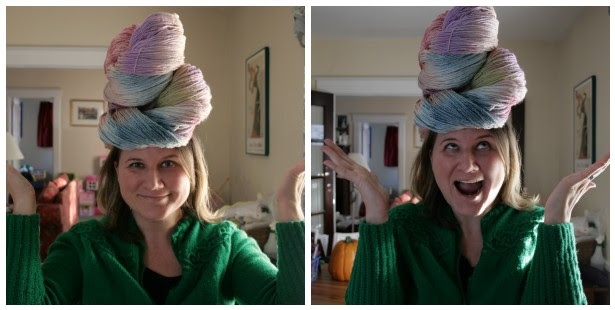 Ok, I've been cheating on my blogging with Flickr. My bad. But it's been SO much fun!

I promise to blog more soon - honest to betsy!