In the past week I've cranked out SO many projects...it's almost surreal!

Back in November (or October?) I signed up for a Funky Carolina handspun hat swap. With thanks to Kirsten, I was able to knit with some yarn she spun (because y'all know I don't dare take on another addiction!). I recalculated/rewrote my Falling Leaves hat pattern for worsted weight and the new version looks so cute in handspun! Like the original chunky version...it's free on Ravelry...check it out here

I also knit a second Lolly Go Round double-cowl using Decadent Fibers Creme Brulee (a mix of merino, silk and mohair). I'll be bringing it, and some printed patterns, to Vogue Live on Friday. Stop by the D.F. booth to see it...as well as two other patterns I designed for them.

Also, if you happen to see me at Vogue Live (I'll be there Friday afternoon and most of Saturday), please stop me and say hello! I'll have some discount cards that can be used through the end of the year...and many exciting patterns will be published...so hang onto it for future use.

In addition to the above knits, I also whipped up another Darth using Cascade 128 Superwash...and have a second one, in a different color, on my needles as I write. These two hats are for the friend of a friend...and need to be done by Thursday. First of all, if you've never used this yarn - you're missing out! It's soft and a real pleasure to work with. Second, and I know that I'm a little biased because, after all, it's my own pattern - but hot damn, this pattern works up SUPER fast!!!

A test knit (sekret for now) and another Lolly Go Round are on the menu for this week...and I hope to have them done in time to model on Friday and Saturday! Hooray!

How's your productivity been? Happy Knitting Tuesday to all!
at 10:11 AM 3 comments:

Last fall I took a day off from the hustle and bustle and drove down to Philly with Kirsten to visit our friend Andrea for lunch and some yarn shopping. Our first stop was Loop and we each picked up a couple skeins for quick projects and went on our merry way.

Only I haven't just gone on my merry way. I've obsessed. Often.

You see, there was a beautiful peony colored cowl that I have NOT been able to get out of my head. Once I got home that afternoon, I called Loop and asked about the pattern/yarn. Then I went online and *ooohed and ahhhed over it (and, if this entry were a pattern, I would say "rep from * to end" - ha ha). 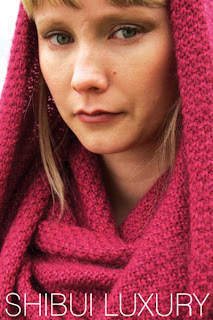 It could be that I'm in love with the color...because I knit a hat using Quince & Co's Rosa Rugosa and everyone compliments me whenever I wear it. Or maybe it was the texture/fiber...so SO soft and luxe. In any event, I haven't forgotten...and am torn on what to DO about it? Do I just give in and order the pattern and yarn once and for all. Do I set a goal: If I knit X number of skeins from my stash I can place an order? Oh gosh, the decisions!

Any recent projects you've seen that you can't get out of your head?