One look at my Ravelry projects page lately and you might think "Has she gone mad? How many WIPs are on her needles right now?"

Well, either it's KADHD or RFS (Restless Finger Syndrome).

OR............it's that my brain is SO excited about the many projects I want to make/finish/start/dream/wear/gift that it can't pick JUST ONE...so I'm rotating between them.

Case in point, I'm making up two samples for the shop so I spent a couple train rides working on the baby sweater during the week. I finished the back yesterday morning. Then, during the day, while we were in the car running errands, I worked on my Bateau sweater since it was St st in the round - can't screw that up too badly. For a short period of the afternoon, while trying to keep Ramona inside and COOL, I swatched for the fingerless mitts - Kollage yarn is SO soft and great to work with btw. Then, last night when we were watching the NASCAR race, I knit the right front of the baby sweater and started the third ball of the Bateau sweater.

It's safe to say that I'm not bored of any of them - I'm just spreading my time between them - and, somehow, they all seem to be going faster...is that possible???

Well, it's another gorgeous day here in NJ so I'll probably sit outside and drink my coffee and knit a bit while Hubbin's works his garden/green-thumb and Ramona does her thing...which is whatever mischief the day brings! 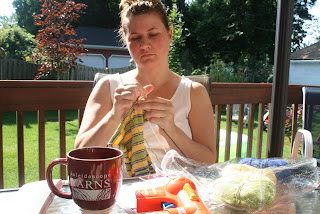