Ask any parent to see a photo of their kids, and they've usually got something to show you - a camera phone picture or maybe an actual 4x6! But what about the "other" kids - our pets?
Peanut is a mixed breed mutt - we KNOW she's part Husky and we THINK she's part Chow or Collie...and the rescue people even suggested Corgi but we're not so sure about that. We adopted her in May 2004 when she was just a couple months old...her name was Cricket. My beloved Weimaraner, Gretchen, had passed away in February after a number of years battling bloat. In some way, we like to think that Gretchen and Peanut are connected since Peanut would have been born around the time of Gretchen entrance to heaven. To celebrate our new puppy, we made Peanut's birthday the date of my husband's and my first date.
As the story goes, we were "just going to look" at St Huberts to see what kind of dogs/puppies they had (having adopted Gretchen when she was 8 I was not adverse to adopting a full grown dog). Ken went through the cages faster than I did. I like to stop and pet each dog, talk to them with love, let them know that someone will adopt them and they will find a good home. By the time I got all the way around to the puppy section, Ken was already done and standing against the wall watching me. When I got to the last puppy I knew I was in love. She was so fuzzy and cute and her two different colored eyes instantly sucked me in. We took her outside to run around and she was so clumsy she fell all over herself. When we took her back to the condo we lived in at the time - she couldn't climb the stairs. It was a fun time having her as a puppy - here's a photo from her first weekend at "home". 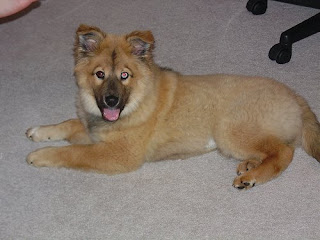 Peanut's adventures have been many since we got her. She has Matt as an older brother; she moved to a new house with a fenced in yard; she went on a ferry to M.V. and a small vessel ride with a life jacket; she somewhat welcomed Casey as a new baby..."what is that small thing and what's this new smell!"; she learned that Casey wasn't so bad afterall...she feeds Peanut all her leftovers; and she's escaped her yard more times than we care to remember.

Here are some recent photos of Peanut - she's just the best dog (despite all her chatter! Man, can she howl!) 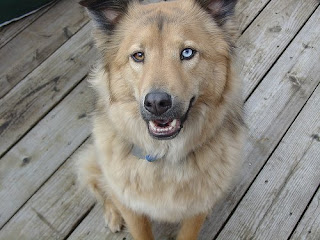 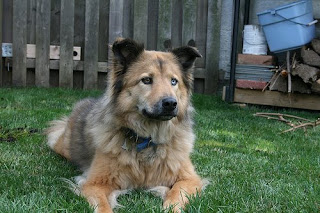 Well, that's the Peanut Gallery for today. Hope y'all had a great long weekend (and vacation if you had one like me).