Ramona/CC recently went to a friends birthday party, held at the family's home, and the kids all did arts and crafts (butterfly and fairy themed), which I thought was a fantastic, and cost efficient way to celebrate. When discussing plans for her upcoming birthday, I suggested a holiday craft-themed party and she thought it was a great idea! Unfortunately, she couldn't invite the cast of hundreds she had for her party last year (gymnastics) but she confidently narrowed the guest list down to 7 friends...some old, some new...and we sent the invitations out!

Before proceeding with the party plans, I should mention that the invites did not get mailed without a hitch. I wrote out the Smurf invitations in pink marker, as instructed, and looked up the friends addresses the Monday before Thanksgiving. I purposely did NOT let CC seal them because I wanted to remind myself to put the return address labels and stamps on before mailing them the following morning. On Tuesday I woke a little early, grabbed the return labels and sealed them before I left the house. Once I got out of the subway I started toward my office before remembering to mail the envelopes. I pulled the stack from my bag, brought the mailbox handle down, placed them inside and released the bar only to, at the last second, realize I had not put the stamps on! [INSERT slow-motion, low-bellied sounding, "noooooooooo!" here] What could I do? It was out of my hands...literally. I emailed the mom's of the guests later that morning and they all got a kick out of my story. A few days later most of them wrote to say that the post office had delivered the invitations...without marking them "postage due". No wonder the USPS is low on funds! Anywhoodles...

The process of finding easy holiday craft ideas for a party of 8 six-year-olds. And here's some what we've come up with (these are other people's images...I'll be sure to post mine once the party is over):

Reindeer Head (I traced and cut out CC's hands - super cute and fun!) 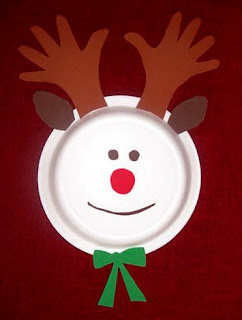 And the piece de resistance...SNOW GLOBES! I'm still working on getting the jars prepared, but I have all the "ingredients" ready to go - these are going to be so cool! [Side note: In wanting to cover all my bases, I did another internet search for these yesterday and it looks like stupid Taylor Swift was featured in People magazine because she's making these for all her friends/family this season. Let it be known - I had the idea first - she stole it from me because it's so awesome.] 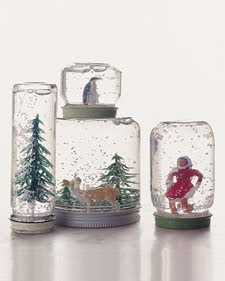 My evening agenda for this week:

Monday - go to Michaels and pick up remainder of supplies

Wednesday - go to grocery store and find perfect jars for snowglobes; bring them home, clean off labels and scuff inside of lids; cut more snowman circles

Thursday - glue ornaments to inside of jar lids (and hope they stick!)

Friday - bake a million and a half cupcakes (half chocolate, half vanilla, by request)

I love the idea of a crafting birthday party! My daughter loves to craft even though she is only 3. Your invitation mailing story is hilarious. But I am so glad it still got there.

Awesome! I think Martha Stewart did the snow globe thing last year? Either way I'm jealous of the awesome party you're throwing. :-)

Snow globes, awesome! My girl would go crazy for those. Damn that Taylor Swift, she needs to stop stalking you.

This is a wonderful opinion. The things mentioned are unanimous and needs to be appreciated by everyone.
flats in lucknow

The preparation was as excellent as the execution!

(we had some fun in the old days by using little saving coupons/stamps on the envelope; that's what you get with progressing to the mechanical age)

The yarns look awesome! Very pretty and a brilliant idea by YOU!! hahaha.

Merry Christmas and a happy and healthy newyear