A couple weeks ago I bought a small, passport sized, journal to keep my to-do list in order. No matter how many fancy electronics or apps I have at my disposal, I'm still a very orderly paper-list keeper. There's something about manually crossing an item off a list that is quite satisfying. Plus, I find that writing EVERYTHING in one place keeps me "in line" and productive...for the most part.

With that said, "blog" has been toward the top of the list but hasn't quite been accomplished. Of course it's a never ending item...but the constant reminder (and guilt of not having done it in a while) has finally gotten me here...hooray!

My goal for Rhinebeck was to knit Elinor Brown's Hallett's Ledge cardigan in two weeks. Yep, two. When all was said and done you can look at it two ways - I either finished it in 12 days...OR it's still not finished. Let me explain. Picture this: the sweater body and sleeves are complete and sewed together. The sweater has been blocked. All I need to do, in two days is the button band. Simple, right? Ribbing and sewing on of buttons. Apparently, not so easy. The band knit up right quick. But the buttons I had, well, they were WAY too heavy. So on Friday night, with our trip to Rhinebeck looming, I was off to our local JoAnn Fabrics, sweater in hand, purchasing ribbon (for finishing and supporting) and buttons. Back home in front of the sewing machine, things took a turn for the worse. Frustrated. Deflated. Aggravated. Yep, I felt those emotions. But what to do? It was nearly 9:00pm and the next minutes would make or break me. Should I abandon the sweater and finish it AFTER Rhinebeck? Um, I didn't come this far for nothin! Do I seam rip the ribbon, frog the button band and start from scratch? Well, it seemed like a good idea. So there I was, trying to seam rip the ribbon OFF the button band. Do you know how difficult that can be? Seriously, what a pain in the butt. After 5 minutes of torture I had a moment of brilliance. Why not just CUT the button band off? I had plenty of yarn left over. Out came the sharpy-sharp scissors and chop chop chop - the button band was gone! Whoot whoot. But now what? It's now 9:45 and getting later by the minute. Would I really be one of those people who finish their sweater on the drive to Rhinebeck? Would I be pulling an all nighter? Now imagine you're me, sitting there with this beautiful sweater in front of you. A beautiful deep purple sweater full of cables. What do you do? Well, why not just seam the fronts and make it a pullover - if only temporarily? Why not, right? So that's just what i did. I seamed the fronts. I know, I know, it sounds SO insane! But it worked out ok - I promise. I also sorta promised myself that I would UNDO the seam and properly finish the sweater. Well, that hasn't been done and I've worn it a dozen times since. Maybe my Hallett's Ledge is just meant to be a pullover...just maybe.

Here are some Rhinebeck photos...you can decide for yourself :o)

with Andrea and Kirsten... 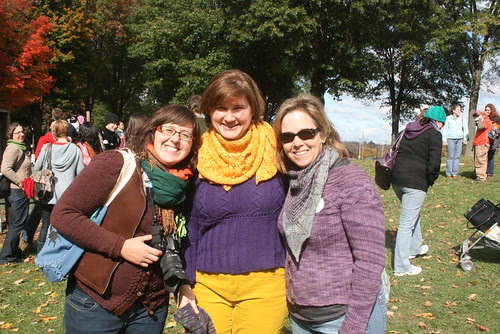 with Yvonne, Misa and Kim... 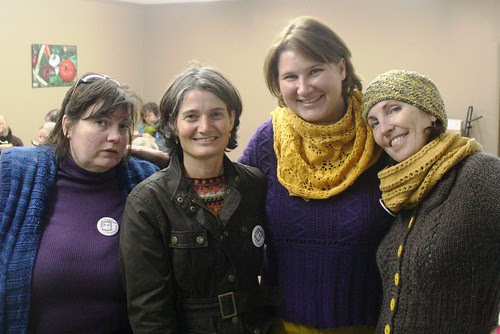 with Ann and Andrea... 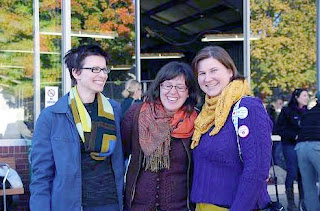 Unfortunately, I also didn't see all my knitter friends/acquaintances - somehow I missed Stephen A (boo hiss), Caro, Mary Heather, and Jaya...to name a few. Next year my friends, next year!

Until then - Happy Friday and Happy Knitting!
at 8:34 AM

I"m such a paper list keeper. Very low tech in my phones and such too. Even my patts get written down with pencil first - and a calculator - as I knit!

(and now that you've seen a bit behind the curtain, you're not surprised, right?)

I think you are brilliant, if first you don't succeed, try try again!
Hallet's Ledge looks stunning as a pullover.

You've been such a busy knitter! Still loving your purple + yellow Rhinebeck outfit. So cute.

I do like the sweater you made and couldn't see the front seam so there you go, it worked!

Did anyone notice the front seam? I think the sweater looks lovely. Great work!

who is stephen a?

I loved your pullover and totally would not have noticed the seam if you hadn't pointed it out. The purple sweater and yellow scarf looked perfect together! I like lists too, I think it might be time to make one.